"Space Kick" Sokołów a sponsor of an animated series

On television, Sunday mornings and afternoons are family time, especially for the youngest viewers. It was with them in mind that an animation like no other in Poland was created. "Space Kick" is a cartoon, where the main character is a world-class football star – Robert Lewandowski! Sokołów is the sponsor of the show.

The plot of the cartoon starts in space, where in a far-away galaxy, on an artificial asteroid called Spaceball, an interstellar football championship is held, called the Galactic League. The most developed civilisations have their teams competing for a cup that is out of this world. Unfortunately, the situation on the space pitch is getting worse and worse every year – footballers are forgetting about the rules of fair play, using an increasing range of tricks and fouls.

After several years of inactivity, the Interstellar Football Federation decides to put an end to the unsportsmanlike behaviour of the players. The officials conclude that the crisis can only be averted by the arrival of a new team, from a fairly 'young' planet. They choose Earth, where they send their RL-9 scout on a mission – to put together a new team!

On Earth, the RL-9 traces a group of kids. They are divided by everything: origin, race, dexterity, but they share a love of football and admiration for Robert Lewandowski. The space scout decides to meet this mysterious, but prominent individual. When he finds him, the footballer is just playing an important match. In an instant, the RL-9 moves Lewandowski to the headquarters of the Interstellar Football Federation, where the surprised athlete learns about his space mission – to create a team and lead it to victory in the Galactic League!

The "Space Kick" is the result of work of TVN and Orange Animation Studios. The cartoon was created under supervision and in close cooperation with Robert Lewandowski. The première of the first episode took place on 27 September 2020. The première episodes will be aired on Sundays at 13:15 on TVN and on the Player.pl platform. Replays are scheduled for Sunday (from 4 October) at 8:00 on TVN7.

As a sponsor of a series of 26 episodes, Sokołów promotes products from the Sokoliki line, addressed to the youngest enthusiasts of meat delicacies. 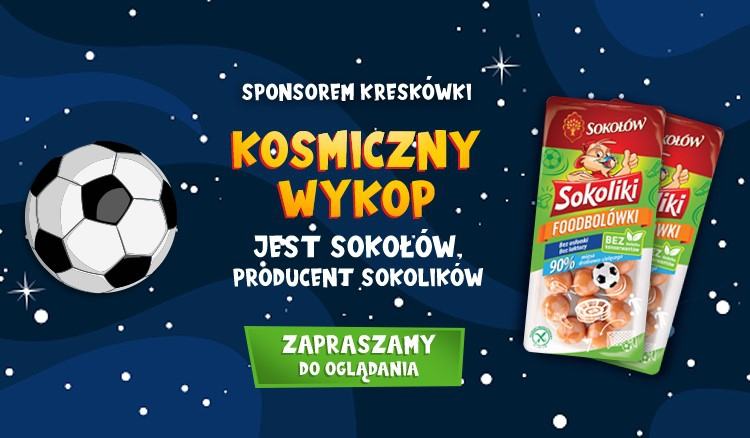